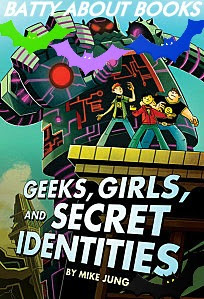 Our discussion continues this week as Kathy, Maria, and I share our thoughts about the second part of Geeks, Girls, and Secret Identities by Mike Jung.

Did you miss part 1? Check it out here!

My thoughts are in green.

Be sure and visit The Brain Lair's blog & Maria's Melange for their initial thoughts and reactions to part 2...after you finish here!

Side note: We've all agreed that this book would have been even better read in 2 parts instead of 3. I actually did just that because I have no self-restraint and continued reading right past the end of part two until I reached the end of the book. :)

I really liked how Chapter 10, begins with Vincent talking about his mother’s boyfriend, Bobby, and the conversations they share in this chapter.  The reality of Vincent talking about how “lame” his Mom’s boyfriends usually are is so honest as he mentions all the ways they try to win him over.  I think many readers will be able to relate to this with all the different family dynamics of boyfriends/girlfriends of one or more of their parents.  I also appreciated how Bobby speaks highly of Captain Stupendous and admires him.  A bonding moment between mom’s boyfriend and her son... I wrote about this, too! Though I’m suspicious of Bobby. I’m not sure if I think he’s connected to a villain, dying to be a superhero himself, or just wants a piece of the action. You know - a hero groupie? I think kids hunger to see this side of themselves in books. They get the broken family or the absent parents but not much of “parents being present but trying to get on with their lives and it doesn’t always work out”. I also liked when Vincent realized Bobby was the first adult to take his Captain Stupendous obsession seriously and not make fun of him. I hope you are wrong, Maria, because I think that would cause V tremendous grief.


I’m not sure why Jung describes Polly’s outfits each time she enters the room, but I sure do like this girl’s style...even when she’s undercover!  “She wore a baseball cap, big mirrored sunglasses, a bandanna around her neck, and another concert T-shirt--Kamikaze fighter Pilot, whoever they were.  Her hair was in a ponytail.” (p. 111) I’m reading Jepp, Who Defied the Stars, and the author does the same thing for the dwarves. It was also a big part of the villain in Shadow and Bone.  Is Jung trying to show Polly’s badassery through clothing as well as actions? :Goesouttobuyobscureconcerttshirts: I love how he includes the funky shirts. I still adore the illustrations in this book, too!


The guys finally begin to “train” Polly how to be Captain Stupendous by showing her lots of videos.  When the discussion turned to why Polly has to turn into a man and the various theories about what happens to her when she turns into Captain Stupendous, I kept saying to myself, that is EXACTLY what I want to know!  Where DOES her body go?  HOW does this transformation work?  I NEED TO KNOW!  Agreed! I always thought the person was INSIDE the superhero. Which is why Stupendous still sounds like Polly in my head. I can’t wrap my mind around them putting their own body somewhere else... I agree... this is so fascinating! I’m a bit of a superhero fan, and this is a new take on the genre (at least as far as I have read them)

How cool was the laser cannon AND finding out that Captain Stupendous is “totally immune to lasers” (p. 137)?  It was so funny! Letting that laser shoot her in the eye! And she had so much fun destroying things! Made me wish *I* could be Captain Stupendous! I’m hoping she’ll take on the persona - begin to love it. Maybe make it her OWN way.

Also, when there’s a STUPENDOUS ALERT, I keep wondering where it comes from?  Who sends them out?  Did I miss that somewhere?  Woah! Good question. I skimmed through the first section again, ok the first few pages, and it didn’t mention who was sending them. Is it the Captain himself??? Maybe the police chief like Commissioner Gordon did for Batman only instead of the Bat Signal it’s a text message... That’s a good point! I am enjoying being on the non hero side of the story. Maybe this is the kind of thing the “Hummingbird network” does?

I felt awful for Vince as the story progressed and the safety of his family is threatened.  Poor kid!  The action progressed so much in the next few chapters I could not stop reading.  I knew I was supposed to, but I just couldn’t stand it.  I HAD to find out what was going to happen and how the conflicts would be resolved.  For me it definitely became a page turner in this second part. Yeah, this second part was definitely a setup. I wish I had the talent and disposition to be a writer! Do they picture this in their heads? The only reason I didn’t read further was because it was busy at work! I plan on finishing it today!

I hope both of you will love part 3 and the ending as much as I did! :)  No spoilers.  Keep reading and enjoy! I’ll be reading it soon! Can’t wait! Today! Yes!
Labels: batty about books