I love end of the year lists, music, and Spotify, so this post is the trifecta love letter to all three.

I recently visited 2017wrapped.com where I signed in with my Spotify account and was given the awesome information below:  my 2017 listening habits all wrapped up & summarized.  If you're a regular Spotify user, I definitely recommend checking it out.  The site itself produces a more interactive graphic that only takes a few minutes to generate.

So here it is...the top artists and songs I've listened to this year on Spotify: 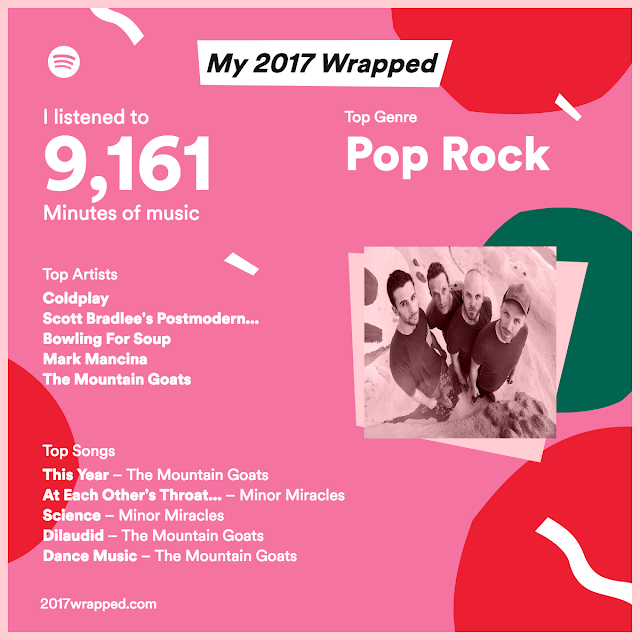 I would be super interested to hear a little bit more about how the top artists vs songs are generated as I find it a bit difficult to understand that an artist could make my top list but yet none of their songs made the top songs list...

My top songs listed include 2 bands (The Mountain Goats & Minor Miracles) but my top artists also include ColdPlay, Bowling for Soup, Mark Mancina, and more.

Yes, I'm quite aware that my taste in music is eclectic, but so is life. 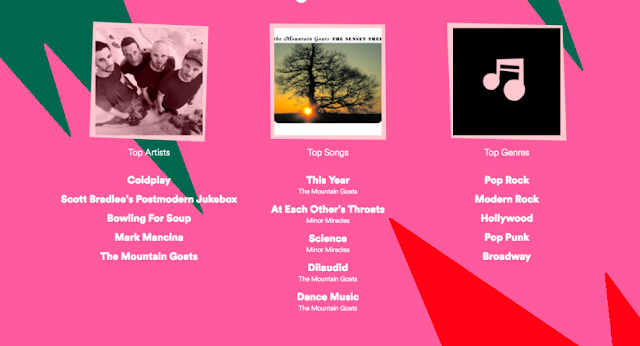 The playlist of top 100 songs definitely brings back many memories from 2017 because each song connects me once again to a person, place, or event.  Sometimes a song or band was recommended by a friend; other times the song is one that just clicked with me after hearing it. 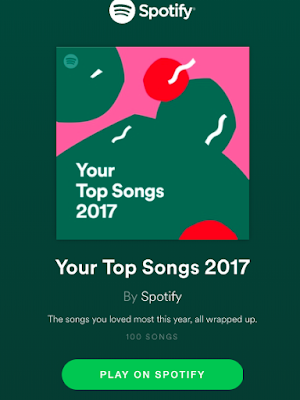 Click above to listen to my top 100 songs on Spotify!

My #1 top song is This Year by The Mountain Goats.  One of the highlights of 2017 was hearing Hank and John Green sing this song on the Turtles All the Way Down tour stop in Indianapolis in October.    I love The Mountain Goats but that song & its chorus  "I'm going to make it through this year, if it kills me..." really sums up 2017 and all of its unbelievable turmoil.  It has definitely been my go to song that I listen to almost daily.

The #2 song:  Can't Stop the Feeling by Justin Timberlake is my favorite to play before workshops and presentations.  It's almost impossible to resist and makes everyone want to get up and dance!

Another tidbit is about the band Minor Miracles who has many songs on my top 30 and were a favorite artist of the year.  Did you know their lead singer is Mike Lowery, the amazing artist/illustrator?  I learned about this band on my friend Matthew Winner's All the Wonders podcast and was immediately hooked after listening.

Three Little Birds by Bob Marley became stuck in my head after watching and hearing an entire elementary school sing it during a school visit only to learn it was their daily song of the 2016-2017 school year and they sing it every morning to start the day off right.  (Why not try it?  Definitely a good mantra:  "Don't worry 'bout a thing 'cause every little thing gonna be alright")

The band Bowling for Soup was recommended to me by a new friend I met in 2017.  They have lots of great catchy songs, lyrics, & are honestly just plain fun.  Definitely a go to for me when I need a pick me up!  It's difficult to not smile when listening to them.

The songs from Rent that are sprinkled into the playlist are due to the fact that I finally saw Rent during its 25th anniversary tour at Purdue during spring break in March As for the Hamilton songs on the list?  I'm still hoping to one day see it live as well!

Scott Bradlee's Postmodern Jukebox is amazing.  Go listen to it now.  The remixing and recording of modern songs into a vintage style, especially jazz & swing, is remarkable.

I'm sure you're thinking, hey Sherry, why so many Smashmouth songs?  They're one of my son's favorites so before I upgraded to a Family account, he would choose that to listen to when we were in the car together.

So many other songs on my 2017 playlist, but for now...that's the highlights.  Perhaps you'll find a new song or band on my list!

I hope your 2017 was filled with amazing songs and artists like mine.  If not, there's no time like the present to get started listening, dancing, & singing along.  Here's to 2018!