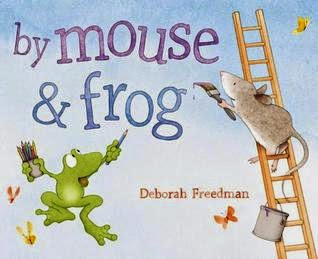 We listened to her read the story (and show the delightful pictures) and also had the opportunity to ask questions.  Mrs. Welk's Firsties had great questions.  (I really want to look inside that drawer at your house, Deborah, and explore all the little books you've made!

Enjoy the tweets, vines, & pictures below from our time together.


. @DeborahFreedman says she is a writer who thinks in pictures! Love seeing her sketch book & hearing about her inspiration @WelkGretchen
— Sherry Gick (@LibraryFanatic) April 14, 2015


Why did you decide to be an author @DeborahFreedman? First an architect & then began making books for her children! pic.twitter.com/Jv4nNIdekT
— Sherry Gick (@LibraryFanatic) April 14, 2015


So powerful for students to hear from published authors about brainstorming and the process! @DeborahFreedman was so kind to share today!
— Gretchen Welk (@WelkGretchen) April 14, 2015