As soon as my daughter saw the information at our local library about an "Edible Book Art Competition", she latched onto the idea and said she HAD to enter.  It didn't have to be a cake, but that seemed to be a good way to go.  She spent time online looking at various ideas and decided she wanted to do something related to The Hunger Games series by Suzanne Collins.  Her thought process: "I need to do something people know about and like!  It would be crazy to do some book no one else knows.  They're the ones voting, so they'll see Hunger Games and say 'I'm voting for THAT!'"  I have to hand it to her; it's definitely sound logic.  You'd have to be living in a hole in the ground to not have heard any of the Hunger Games hype (which ironically may apply to my mother who had no idea what I was talking about when I sent her pictures of the creation...)

My daughter decided to decorate cupcakes so she could create several small scenes, 1 for each character/book she wanted to feature.  After shopping for supplies, she decided on small cakes since she would have a bit more surface area to decorate.  I baked the cakes for her.  She had saved several ideas from Pinterest and had a few of her own.  She loves to sculpt with clay, so we were thrilled to find fondant at Hobby Lobby.  It seemed like the perfect edible medium for her to decorate her cakes.  I helped roll out the fondant for the tops of the cakes, but that was the end of my helping.  She went on to sculpt various mockingjays to illustrate each of the 3 books. 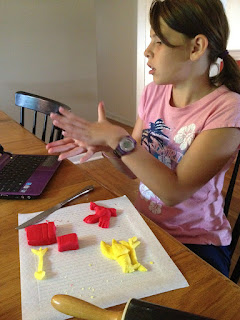 Night lock berries, an arrow/swirl, and a rose for President Snow (with blood droplets) were also planned and created.

In the end, here's the final creation: 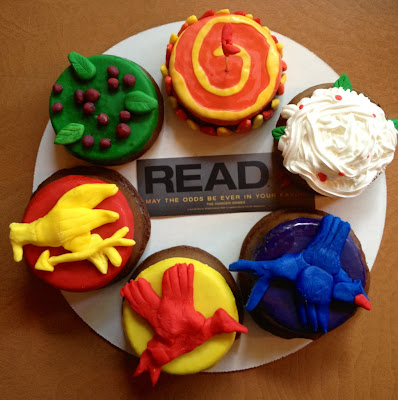 Adding the ALA bookmark was a last minute decision.  She wanted to write Hunger Games in icing, but was fearful of messing up the cake display board or touching the cakes after she had them placed!  We slid the bookmark under the cakes and her creation was finished!

I think she did an incredible job.  I can't wait to see the competition!  In my head, she's already won.